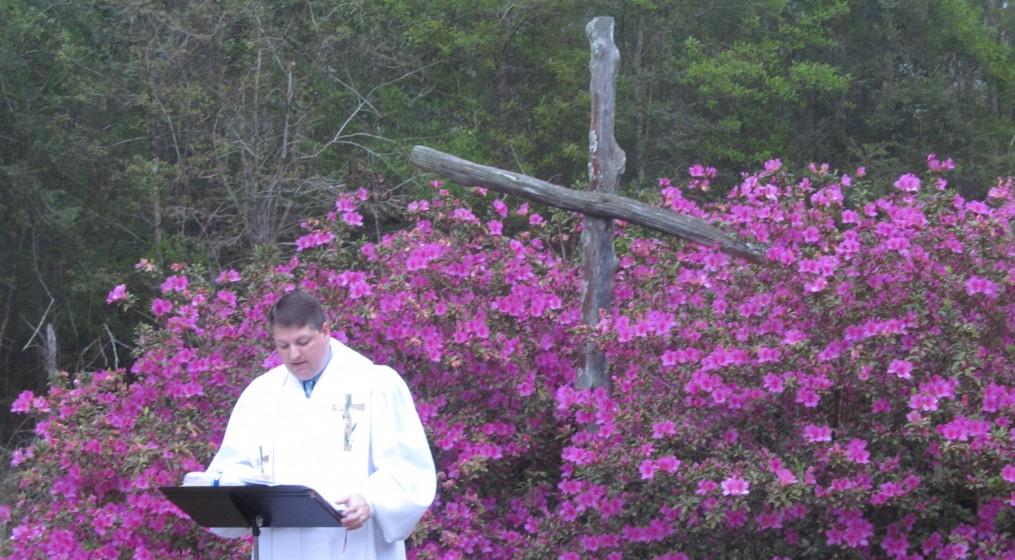 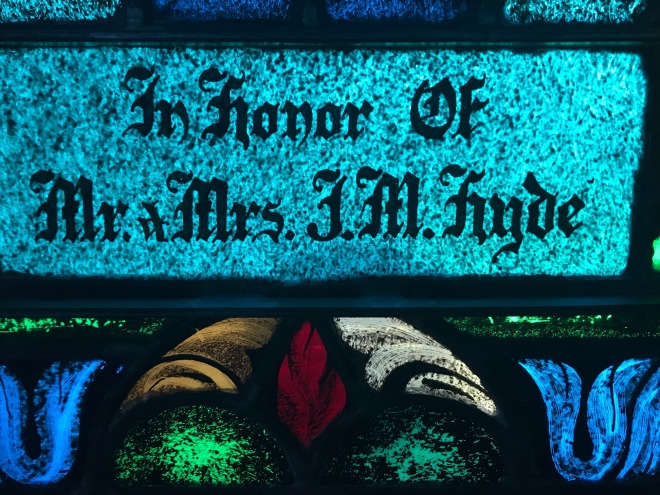 (Author’s note:  This is the manuscript for my message on June 10, 2018 at FUMC Winnfield and is the second in my “Windows to the Soul” sermon series expounding on the Christian symbolism present in our church buildings and sanctuary windows at FUMC Winnfield.  I tried to include my sources but my end notes did not transfer well.  You’ll find the sources listed at the end. Much of this information is from “FUMC Winnfield: Christian Symbolism and History” published in 2012. I decided to publish in case some were absent and would like to read my message.)

So it is with the stained glass windows in our sanctuary. They reveal God’s truth to us. “The WINDOWS within the sanctuary are, beginning on the left as we face the altar, windows one through three. On the right are windows four through eight, and behind us above the balcony is window number nine. Above the entrance to the educational 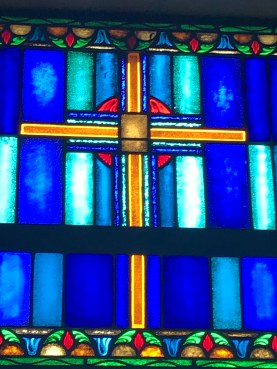 building is window number ten, the lovely portrait of Jesus, the Good Shepherd.
The windows are beautiful memorials to the Christian faith. Within the sanctuary we find that windows one through eight repeat the Latin cross in the upper half. The red circle behind the cross is a symbol of eternity. The bright colors are not only lovely to behold; they, too, have religious significance. Red depicts divine zeal on the day of Pentecost and refers to the blood of martyrs of the church. Green is the universal color of nature, signifying hope; gold refers to worth, virtue, the glory of God, and the Christian might. White is the symbol of the Creator”, light, joy, purity, innocence, glory, and perfection. Violet denotes mourning and penitence, humility, suffering, sympathy, and fasting. Purple is the regal color referring to the triumphal entry of the King of Kings, who was of royal (Davidic) descent, and who is the ruler of many hearts. Purple also represents penitence, referring to the purple garments put on our Lord when they mocked him (John 19:2; Mark 15:17). These colors change, varying with the light filtering through them. During the day they have a brilliant effervescence; at night, they acquire deeper, muted tones.”

Today we will examine Window Number One (Cross and Vines/Dove and Light/Bible and Lily) in Honor of Mr. and Mrs. J.M Hyde. James M Hyde came to FUMC in 1902 by Certificate of Transfer, died 2/23/55 while Luther L Booth was Pastor. According to the obituary, James, Son of the late Henry Hyde and Callie Harper Hyde of Grant Parish, Mr. Hyde came to Winnfield in 1902 to manage the M. M. Fisher Dry Goods Co., and later the Grand Leader, large mercantile firms. Shortly afterward he entered the mercantile business for himself and remained in that business until about 1935 when he retired and looked after his real estate and finance interests.

Mr. Hyde was a veteran steward in the First Methodist Church and had held every office that could be held by a layman at some time during his life. He had also been active in civic affairs, serving as a member of the Winn Parish School Board and the Winnfield board of aldermen at various times. He was a member of the Knights of Pythias.

Mrs James M Hyde came to FUMC 3/16/19, died 8/31/1958 while Rev. RH Staples was Pastor. The obituary states that she was the former Miss Addie Scarborough, native of Natchitoches, and a member of a prominent Central Louisiana family. Mrs. Hyde had been a resident of Winnfield since 1902 and a long time member of the First Methodist Church. They were survived by two children Mrs. Tracy Harrell, of Winnfield; one son, James Hyde of Natchitoches. Their daughter, Vermell, was the pianist and organist at FUMC for several years. They were the grandparents of Tracy Lee Harrel. The Hyde’s and their family have passed a great tradition of faithfulness to us, as well as a wonderful gift in their beautiful window.

II. Body
A. Cross and Vines 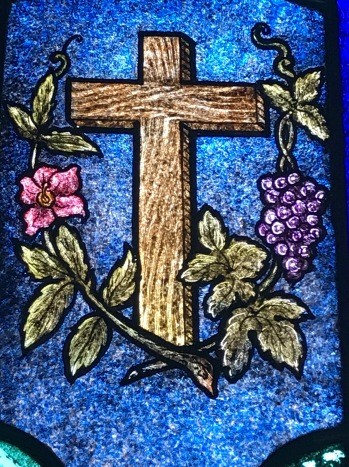 “The Latin cross is the most commonly seen cross. This is the form on which it is said our Lord was crucified. Protestants usually display it as being empty, without the body of Christ, representing Him as the risen and living Christ. The vine is referred to by Christ in John 15:5, ‘I am the vine, you are the branches.’”

The Vine Cross refers to John 15:1-2 “I am the true vine, and my Father is the vinegrower. 2 He removes every branch in me that bears no fruit. Every branch that bears fruit he prunes to make it bear more fruit.” Jesus calls himself the vine, and Christians are the branches of that vine. Even those of us without ‘green fingers’ know that it’s the branches that bear fruit. Jesus (the vine) mediates between God and man.

And we also know that fruit will grow if, and only if, the vine has roots which can deliver moisture from a rich soil. In our analogy, the root of the vine resembles the Holy Spirit. The root is unseen, but we know it’s there because the plant flourishes and bears fruit.
If we imagine God having a gardening role, nourishing the vine, then if a branch bears no fruit, the gardener cuts it away. It is good for nothing except to be consumed by the bonfire. However, if the branch bears fruit then the fruit is harvested and as a result, the branch is in a stronger state to produce yet more fruit.

There are many branches yet we all share the same vine and the same root. And the same Gardener tends to each branch. God loves us all, whatever our position may be. And the grapes? These are the products of our Christianity; whatever God has called us to produce. The grapes on the vine represent Christ and His disciples and the unity of the church.

B. Dove and light 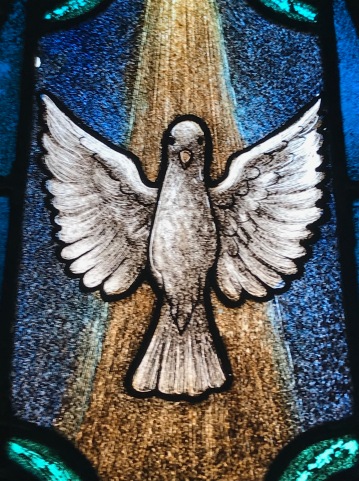 The New Testament is not the only place we see a dove depicted. In Genesis 8:8-12, after the ark has landed on the mountains of Ararat, Noah sends out a dove three times to see how far the flood waters have receded. The first time it found nothing and returned to the ark. The second time it brought back an olive leaf, so Noah could see that God’s punishment was over and life had begun again on the earth. (The image of a dove holding an olive branch continues to be a symbol of peace to this day.) The third time, the dove did not return, and Noah knew that it was safe to leave the ark

Dove imagery is also utilized in several of the prophetic books of the Hebrew Bible. The low, cooing sound of a dove served as mournful imagery to evoke the suffering of the people of Judah (see Isaiah 38:14, 59:11; 11 We all growl like bears; we moan mournfully like doves. We look for justice, but find none; for deliverance, but it is far away.) But doves were more than just a soundtrack for a people who had fallen away from God; they were also an instrument of atonement. Several passages of the Torah (especially Leviticus) specify occasions that require the sacrifice of two doves (or young pigeons)—either as a guilt offering or to purify oneself after a period of ritual impurity (including the birth of a child). Several columbaria, or dovecotes, have been excavated in the City of David and the Jerusalem environs (by crawford). These towers were undoubtedly used to raise doves for sacrificial offerings, as well as for the meat and fertilizer they provided—a popular practice in the Hellenistic and Roman periods that continued into the modern period.

Thus, by the time of Jesus, the dove was already rich with symbolism and many interpretations—as a representation of Israel, atoning sacrifice, suffering, a sign from God, fertility and the spirit of God. All these meanings and more were incorporated into the Christian use of dove iconography. Doves appear in the New Testament at scenes associated with Jesus’ birth, baptism and just before his death. The Gospel of Luke says that Mary and Joseph sacrificed two doves at the Temple following the birth of Jesus, as was prescribed in the law mentioned above (Luke 2:24). Yet in the Gospel of John, Jesus angrily drives out all of the merchants from the Temple, including “those who sold doves” to worshipers there (John 2:16).

But perhaps the most familiar dove imagery from the New Testament is recounted in all four of the Gospels (though in varying forms) at the baptism of Jesus by John the Baptist in the Jordan River. After Jesus came up out of the water, the [Holy] Spirit [of God] came from heaven and descended on him “like a dove” (see Matthew 3:16; Mark 1:10; Luke 3:22; John 1:32). The baptism story built on the pre-existing symbol of the dove as God’s spirit (and its many other meanings) and firmly entrenched it as the preferred representation of the Holy Spirit. The dove represents the Holy Spirit that also indwells every believer after they have repented and trusted in Christ, as well as how God has moved throughout history. The Light is a symbol of God, the Creator. 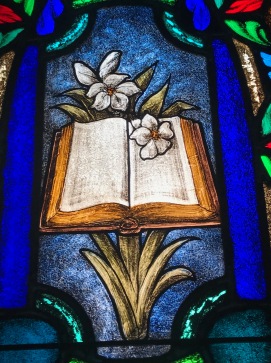 “The open book often pictured on stained glass windows in the church refers to the Holy Bible. the word of God. The book shown open indicates that the Bible is accessible throughout most of the world in over 1,000 tongues. The Easter Lily, a symbol of purity, is a common symbol of Easter and blooms at that time of the year.” We will look more closely at the symbolism of the Easter Lily in the Dickerson window, so this morning I’m going to focus on the Bible.

The Protestant Bible is 66 books. The Catholic Bible is 73 books since it includes the Apocrypha (hidden books). The Bible was written over thousands of years and by many different authors in Hebrew, Aramaic, and Greek. It was not until the 5th century that all the different Christian churches came to a basic agreement on Biblical canon. During the Protestant Reformation in the 16th century, books not originally written in Hebrew but Greek, such as Judith and Maccabees, were excluded from the Old Testament. These are known as the Apocrypha and are still included in the Catholic Bible. Today there are more than six billion Bibles are in circulation around the world, printed in 484 languages. As the reach of the Bible has spread, Christianity has grown with it. Today, there are more than 2.18 billion Christians in the world studying the Word of God.

People are a lot like glass. Glass can reflect, like a mirror, or transmit light. Our windows are at their most beautiful when they permit the light to flow through them. The light also shows the flaws and quality of the glass. Like glass, we need to have the light of God shining through us. Like glass, we can merely reflect, or transmit light. Jesus offers inner light to those who accept him. He is the light of the world according to John 1. We can accept the light, or reject it. If we believe, that inner light becomes ours.
We love our stained glass windows and we should. But what do people see in us? Does the light of Christ shine through? The Hyde window reminds us of their faith and generosity. The cross and vine remind us to stay connected to Jesus and what he has done for us. The Dove and light reminds us of the Holy Spirit and Jesus, the light of the world. The Bible and Lily remind us of the good news that we are called to share. The question is will we allow the light of God to shine through us as brightly as it does these windows?